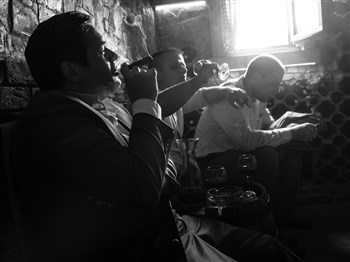 Begin this criminal tour by enjoying a two course lunch

Following your meal, your Blue Badged Guide will meet you to begin your walking tour.

Step into the streets of East London where you will hear about the Kray Twins, the most notorious criminals of the 1960's, heading an organised underworld empire of protection reckets, violence and murder.

The twins were deeply embedded wihtin the post-war London underworld, and were Kingpins of organised crime, feared for their enforcement of protection rackets, armed robberies, arson attacks and murders, notably the famous dispatching of George Cornell and Jack 'The Hat' McVitie.

They were also celebrities, Swinging Sixties nightclub owners, who courted Hollywood stars like Judy Garland, Frank Sinatra and George Raft and British pin-upssuch as Diana Dors and Barbara Windsor. They were even photographed by David Bailey.

They were very male fantasy figures, men who lived out our darkest dreams of transgressing the social rules that restrict us and who enjoyed the spoils of their own darling, wearing sharp tailored suits and swilling champagne in attractive company with money to burn. We still covet the bling and glamour that come with theit degree of notoriety.

This tour will take you behind the scenes of the Krays - see locations where they have been and where murders have taken place and hear stories about the life of these famous criminals.