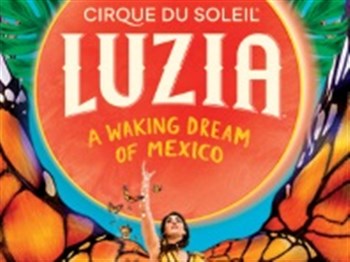 Departing Suffolk & Essex - Luzia takes you to an imaginary Mexico, like in a waking dream, where light ('luz' in Spanish) quenches the spirit and rain ('lluvia') soothes the soul.

LUZIA takes you to an imaginary Mexico, like in a waking dream, where light (“luz” in Spanish) quenches the spirit and rain (“lluvia”) soothes the soul. With a surrealistic series of grand visual surprises and breathtaking acrobatic performances, LUZIA cleverly brings to the stage multiple places, faces and sounds of Mexico taken from both tradition and modernity.

Water as a source of inspiration

Integrating the element of water adds a level of acrobatic complexity never-before-seen under the Big Top at Cirque du Soleil. Cyr Wheel artists perform the unprecedented feat of rolling and spinning under the rain, while an aerialist suspended from a Trapeze flies and twirls through pouring showers

A set of multiple faces

LUZIA takes audiences from an old movie set to the ocean to the semi-desert to an undersea world to a cenote to the jungle to a city alleyway to a dance salon – passing smoothly from an urban setting to the natural world, past to present, tradition to modernity.

Breaking down the barriers

LUZIA explores the combination of hoop diving – a traditional circus discipline from China – and two giant treadmills to generate speed and expand exponentially the amount of daring leaps executed.

Please Note: acts are not guaranteed and performers may change