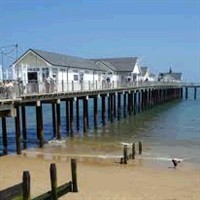 Departing Suffolk & Essex - A relaxing day out along the Suffolk coast.

is a charming, north Suffolk seaside town on the Suffolk Heritage Coast. Almost an island, being bounded by the North Sea to the East, by the River Blyth and Southwold harbour to the South-West and by Buss Creek to the North, there is just the one road in and out of Southwold.

The town offers much of interest, but it is the sea and Southwold's links with it that make this a wonderful destination at any time of the year. With its working lighthouse, beach huts, award-winning pier, busy harbour, cliff top cannons and of course the beach, Southwold is a quintessentially English resort town.

Aldeburgh, on the Suffolk Heritage coast, has a particular charm that has attracted visitors from all over the world. Some have stayed, adding their own stories to the long history of the town. The composer Benjamin Britten settled here, his opera Peter Grimes was inspired by local poet George Crabbe and the town itself. The annual Aldeburgh Festival at nearby Snape Maltings was developed by Britten, the site being transformed from disused malthouses into a concert venue of international acclaim that now hosts a year-round programme of musical events.