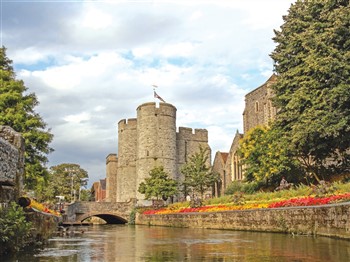 Departing Suffolk & Essex - Dating back to Roman times, Canterbury is one of the UK's most important religious and cultural centres.

Canterbury, England's most famous cathedral city, home of Geoffrey Chaucer's Canterbury Tales and now a UNESCO world heritage site. Canterbury sits on the River Stour in one of the most attractive corners of rural Kent. It is easily reached by road, rail or sea, and has been welcoming visitors for thousands of years.

The Norman cathedral  still dominates the skyline as you approach the city, giving 21st century visitors the same sense of awe as their medieval counterparts. Making a pilgrimage was an important part of  medieval life and pilgrim's flocked to the city to visit the shrine of the Archbishop of Canterbury, Thomas Becket , who was murdered in his cathedral.

Today Canterbury still welcomes visitors from all four corners of the globe and has, with its many ancient buildings, shops, bars and restaurants, retained both an old world charm and a cosmopolitan vitality.